Running is what I do. I have not always been a runner and in fact I started running after my last major bicycle accident.  Running seems to have cut my hospital length of stays significantly.  I also help people buy and sell real estate with my lovely wife and the best Realtor in Riverside.  So I run.  Oh, the other thing in enjoy is solitude hence I run where I generally do not see other humans.   I also run with my other best friends, Max (golden retriever) and Lakota (Alaskan malamute).  We have been running in the hills east of McAllister St. in Riverside, CA for a little over a decade and we have seen a lot of changes over the years; mostly environmental and ecological changes.  But these past few months have brought the most dramatic and long term changes yet: the new housing development of Lennar Homes, a major home builder in CA.

I first noticed the changes about a year ago when Western Municipal Water made improvements to a dirt road connecting McAllister and the Canyon Ridge development, then over time new survey stakes started showing up here and there.  Then in November 2014, Lennar employees put up a plastic fence marking where they were going to start building new homes.  This fenced area only includes about a third of the total land there that they have purchased.   Below is a map of the total development that involves about 267.79 acres. 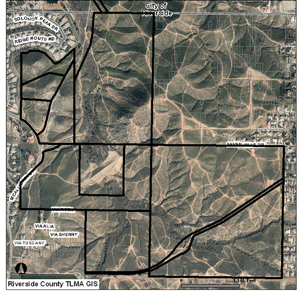 I have contacted Lennar and asked for detailed information about this development but have not received anything from them yet.  But this is what I know; in 2005-2006 Riverside County approved a development called the “Lake Mathews Golf & Country Club” that involved a large development of new homes around a large private golf course.  Since then we as neighbors thought that with the housing crash of 2007-2008 that this project was forgotten.  However Lennar had the County update the “Lake Mathews Golf & Country Club” plan on 9/24/2013.

Originally, Riverside County, via Supervisor Bob Buster, promised the residents that lived in the county  that if we allowed the closure of McAllister to Stewart and access to the Riverside City via the green belt, the county would have the developer of the  “Lake Mathews Golf & Country Club” put in “Road A” that was supposed to connect McAllister to Van Buren.  I have contacted Supervisor Jeffries for an update on Road A and I am waiting for a reply (and not holding my breath).  The reason for my skepticism is Lennar. You see, when they first started their development on McAllister next to the KB homes in southwestern Riverside (called Sierra Bella and Sierra Heights, Lennar had a neighborhood meeting with the current residents nearby promising all sorts of things such as access to parks and trails, removal of toxic soils (which they used as an excuse to elevate their many of their home sites significantly blocking views of the homes in The Orchard and thus reducing their value). These turned out to be empty promises just to get us to support their development, so we still have a sour taste from our initial Lennar experience.

So this area of Riverside CA has been a part of my life for nearly a decade and it is painful to no longer have access to this rare secluded little wilderness that I and a few hardy souls have enjoyed.  But I am first and foremost a strong believer in private property rights and since this has never been my property nor the property of the taxpayers, I understand and respect the desires of the land owners to use their properties as they see fit and within the guidelines of the county planning.   Also in the back of my mind I always knew that this day would come.  It still hurts though.   And interesting bit of irony though, speaking of this land not being public land set aside for the enjoyment of taxpayers, it seem that the land Riverside County does purchase with our dollars, we as citizens are prohibited from entering “their” private property (the Steven’s Kangaroo Rat Preserve the involves thousands of acres around Lake Mathews and for miles to the south but I will not get into that right now).

Anyway, I will keep you updated as things develop and I get more information.  Otherwise we will see you on our runs.

A final word of caution for bikers, runners and those just wanting to walk along McAllister; Lennar put their fence right at the edge of the road leaving no room on either side of the road for cars to pass cyclists and/or pedestrians safely, it is a blind curve for cars so this is extremely dangerous.  I know it is a good law suit against a multimillion dollar company if you get injured or killed, but believe me, the pain and suffering is not worth it, so be very careful in this area.

Thank you. This is great information on Riverside. Looking forward to new post Don.

I have been running on the "Cross Country Course" as we like to call it for over a decade as well. We had our fingers crossed for years that it would become protected wilderness area of some sort. Sad times. Thanks for the update!

Don, thank you for the historical context and for sharing your thoughts. I hope you will continue to in the future and very much apprecite it.

I guess they are eliminating the golf course altogether. That would have been a wonderful way to increase home values in the area.

Does anyone know what the price range will be?

I agree. This should have been purchased by the city and turned into a park of some sort or donated to the citrus park. I just went up there a month ago and wow is it beautiful from some of the hill tops! In regards to the pricing they continue to tell us to call back towards Fall and refuse to provide any detail - home sizes, lots sizes, completion date....etc. I assume there will be an effective tax rate close to 2% like the homes up Van Buren with a HOA. Home values increasing is very unlikely now with the freeway that is going to go through called "A" street. What a clusterf*ck this is going to cause in the AM/PM during rush hour.